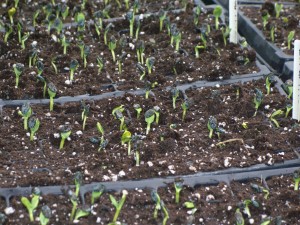 The humble beginnings of the Rocky Ford Cantaloupe began around 1870 when a man by the name of George Washington Swink came to a Rocky Ford Crossing as a pioneer and decided to settle.  He chose to build a trading post along the Arkansas River.  It was there, at the site of that trading post, where Swink grew his first melons.  To accomplish this feat in the dry climate of Southeastern Colorado, Swink used the river to irrigate.

G.W. Swink continued to grow melons and experiment with various techniques at the original site until 1877.  This year saw the arrival of the railroad at its present location and forced Swink to move west a few miles, settling in present day Rocky Ford.  By 1881, Swink had begun larger gardens and was growing nearly 300 tons of watermelon a year.

Prior to 1886, Swink was growing a type of muskmelon that was bigger than a cantaloupe.  1886 was a crucial year for Rocky Ford, as it was the year that saw the introduction of the Netted Gem Cantaloupe. It is this cantaloupe for which Rocky Ford would become well known.

Around 1890, advertisements were placed in eastern papers that read:

“Come to the Sunny Arkansas Valley of Colorado and regain your health while growing delicious Rocky Ford cantaloupes!”

Rocky Ford Cantaloupes are superior in nature when compared to other cantaloupes not because of the seed variety, but because of the climate. Rocky Ford is located in the Southeastern part of Colorado in the Arkansas Valley.  This valley provides hot dry days with cooler nights during the summer.  This change in temperature, with the lack of excess water and the high mineral content of the soil, makes the cantaloupe sweeter.  The typical non-Rocky Ford Cantaloupe will average a sugar content of 10% or less.  Rocky Ford Cantaloupe can reach up to a sugar content of 15%, with specialty melons registering even higher!  Though seemingly a minor difference, the taste between the two is incomparable!