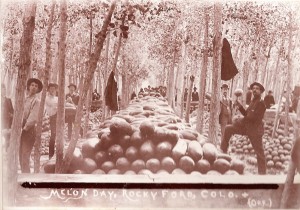 Watermelon Day is the pioneer of Colorado’s numerous autumn festivals. This unique celebration was started in 1878 by the Hon. G. W. Swink, about 25 people being present. In 1879 the crowd doubled, but was not so large but that a grain door of a Santa Fe box car provided all the table space necessary. Up to 1882 the melon feast was served in the old Swink store room. In 1883 a table 12 feet long was built in the grove. A display of agricultural and horticultural products was made in the same grove. Up to 1886 the ladies of Rocky Ford supplied dinners to all comers. About that date the crowd had so increased that Mr. Swink was compelled to call in help to cut the melons.

The first excursion train was run in 1887, which brought such numbers that the free lunches had to be abandoned, but Recker’s bakery served an excellent 15-cent meal. The number of excursion trains and the size of the crowds steadily increased up to 1892 when the Arkansas Valley Fair was started. The Fair and Watermelon Day has several years been honored with the presence of the Governor and other distinguished citizens.

The attendance has grown from 25 to 12,000, and the table accommodations from a car door to a table 500 feet in length. The Santa Fe now runs excursion trains from various parts of the state and Watermelon Day is al 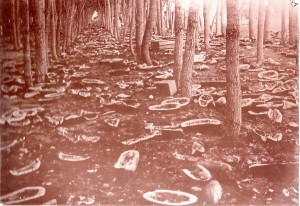 most universally accepted as a general holiday in the Arkansas valley.

(taken from back of cabinent card photo circa 1890’s)